The newest additions to my household have been with us for two months now. The day after Thanksgiving, I took in two pathetic and sick rescue kittens. I intended to nurse them back to health and send them off to their forever home. My resolve lasted until my mother-in-law died a few weeks later. We named them Gimli and Greybeard.

Having two kittens that required medication twice per day, feeding, cleaning, and lots of cuddles gave me purpose during a time when I really needed it. My court reporting day job slows during between Thanksgiving and Christmas, and it would have been incredibly easy to let grief overwhelm me. We accepted they were a part of our family and officially adopted them right after Christmas. The transition to having kittens has been interesting.

It’s been 10 years since I’ve had a kitten and not much has changed, they are still as wild as I remembered and destructive. I kitten proofed my desk since nothing is safe on it. We have hardwood floors upstairs in the house, and the kittens sound like thundering horses as they run up and down the hallways.

Last night I heard a loud THUNK, followed by the pattering of kitten feet running like crazy. I assumed they knocked something over, but it didn’t sound broken, so I pretended it didn’t happen. I was writing and in the middle of a scene and at a bad stopping point. My husband was off doing god-knows-what and didn’t get concerned by the noise, so I assumed it was fine….

About 10 minutes later, an extremely potent clorox smell permeates the office. The bathroom is on the other side of my office wall so I went to question what the heck my husband was doing and to semi-bitch about how the wall doesn’t block strong odors. He wasn’t upstairs, so then I thought he was using it downstairs, which was worse because at this point the entire upstairs is a clorox smokebomb.

I open the door to the basement and see a puddle of water at the base of the stairs and water dripping from the ceiling. I yell down to him to ask him why in the heck is there water coming from the ceiling and when he approaches it, he and I both realize that it’s clorox.

Right above that part of the ceiling is a cleaning supply closet upstairs, and investigation quickly reveals that somehow the door latch failed and the kittens got in there. They tipped over a 64 oz mostly full bottle of clorox. It flooded our hardwood floor entryway, seeped under the floorboards, and was dripping downstairs.

The random convergence of factors that needed to be in place for this to happen is odd. How did the supply closet door become unlatched? How did the kittens get it open? Was the bottle cap not shut properly?

My husband did the hard work of cleaning it up while I hunted me some kitties. I had to give all 3 of them a sniff test to determine if I could detect clorox on anyone. I originally feared maybe they stepped in it, and then later realized it could have been worse and someone could have tried to lick it. Luckily, I didn’t identify a whiff of bleach on any of them. I can tell you though, Buddy, our elderly cat, was not a happy camper when I manhandled him to sniff his paws.

So this morning I’m thinking about how destructive and adorable these little balls of fluff are since the house still has a faint odor of bleach. I reminisced about them biting my computer cords, knocking out the power supply to my laptop, and scaling the sheer drapes in the living room with their claws.

Then I walk down the hall and catch Gimli CHEWING on the wallpaper!

Before the clorox incident, I was considering letting them loose at night and not forcing them to sleep in my small office, but spilling bleach and then chewing on the wallpaper is a deal breaker. They are obviously not mature enough to join the household while everyone sleeps.

But for all my complaining, I’ve really grown to love them in the last month. Greybeard is still a total lovebug and melts my heart. He follows me around and if I leave, he’s super excited when I get home. I took a lunch break from work today and both kittens climbed up on my desk to snuggle into my arms as soon as I sat down again.

Gimli is more reserved, and it’s taken awhile to earn his trust, but I have finally learned that if I let him come to me when he wants love, he visits multiple times per day. It’s small steps with him, but this morning I approached him and he let me pet him while he was on the floor; previously he always ran away.

So while I didn’t plan on having more cats, these two came into our lives at the right time. They make me laugh, force me to take breaks from work or writing to cuddle them (which is healthy for me), and caring for their needs has given me a purpose on rough days.

I just need to remember all of this when I catch them chewing on the wallpaper again, since I know it’s going to happen. 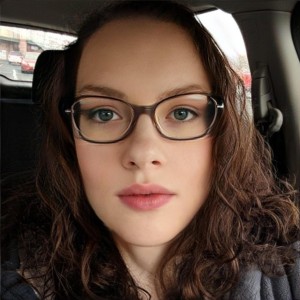 Writer/reader with a day job and a jerkface cat. I got my love of reading & writing from my mother. Writing my first novel for her.

The Aftermath of a Death